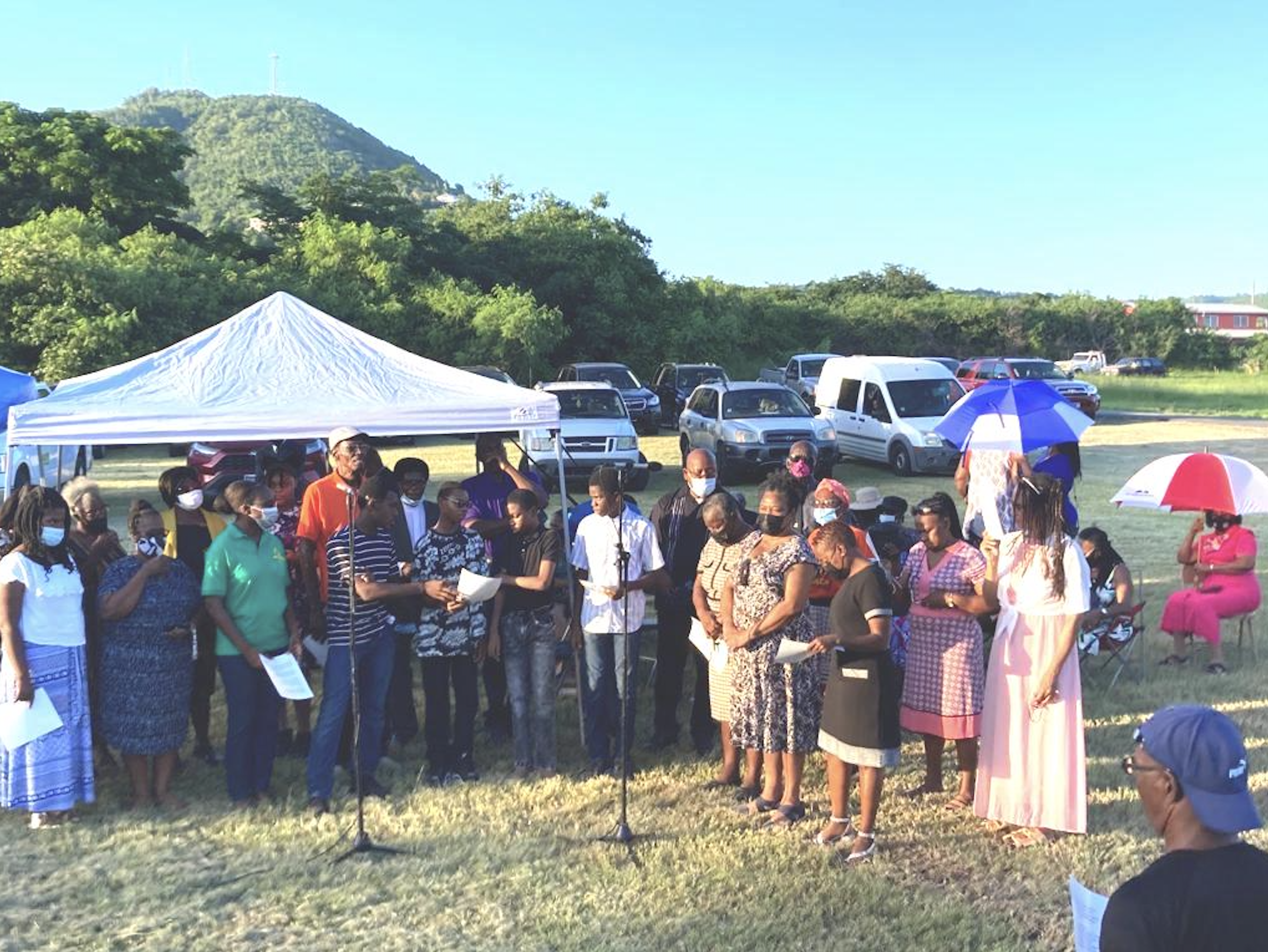 How It All Began:

On October 30, 2021, exactly fifty years since the baptism that marked its birth in 1971, Pastor Thomas Rose welcomed members and friends of Central Church in St. Croix who had gathered to give God glory for what He has done. The celebration was held on the exact “sacred spot” in Estate Calquhoun in St. Croix where fifty years ago, members of Christiansted and Faith churches along with our Spanish brethren had pitched a tent to hold an evangelistic campaign. The Virgin Islands were considered difficult terrain for evangelism, but the leaders pressed on in faith. Pastor Kembleton S. Wiggins (now deceased), from the East Caribbean Conference would be the Evangelist. Pastor Steve Willsey, the senior pastor, would lead out in organizing the campaign, and Pastor Reginald Michael, the intern, would be in charge of preparing the field. At that first baptism on October 30, 1971, two hundred and twenty-six precious souls were baptized. It was the start of what would be Central Church.

Dr. Lloyd Henry, a member of the planning committee, spoke of the excitement as the tent went up on September 12, 1971, and of non-Adventists stopping to give a hand and then inviting people to the meetings. He mentioned the thrill of seeing, on opening night-- September 26, 1971-- a busload of visitors in a school bus rented by a church member to bring guests to the meetings.  He admitted that he realized that “something big” was about to happen. One of the original ushers, Mary Kent even dressed in her usher uniform described the journey her life took, bringing her back to recommitting her life to Jesus again. The praise team sang the original theme song, “Since Jesus Came into my Heart” with voices a little older but still with the fervor of youth.

Testimonies flowed—Alvira Brooks describing how she was invited to attend and did so with her husband, now deceased. She and Ophelia Walter, both still faithful members, helped swell the ranks of the St. Croix Seventh-day Adventist school, whose enrollment almost doubled as the children of the new believers joined their peers there. Whole families joined the school, like the Freemans with their seven, and the Christophers with their five.

Karon Reynolds presented the church’s history in prose (written by Annette Michael) and Jada Patrick and Reuben Christian re-echoed the events in poetry (written by Pastor/Poet Maurice Andrews) These youthful presentations helped to take our memories back “to the place where (we) first received (the message).” No one could forget the mud, September and October being the rainy months. Yet there was standing room only even as the rain poured down on the leaky tent.

Pastor Reginald Michael, now a retiree, shared some of his early memories of preparing the field for the crusade, and talked about the challenge of locating the right spot. He told of the excitement of learning evangelistic methods from the evangelist, Kem Wiggins. He also had for “show and tell” two of the original bumper stickers one of which said, “Follow Me to the Big Green Tent.” Pastor Michael was one of the eight pastors who baptized eight persons at a time in that October 30, 1971 baptism.

Although two hundred and twenty-six souls were baptized that Sabbath afternoon at the Altona lagoon in Christiansted, by the time the baptisms were over (for a while) the following year, the number of new believers was 323, and a whole new and growing church, Central Church, was born.  Pastor Michael had been assigned by the Conference President W. W. Thompson to shepherd the young flock who, without a church home, were worshipping in leaky tents, in the wilderness and in Christiansted, before they purchased a plot and built a church home in Estate Plessen.

This October 2021 celebration, organized by Pastor Claudette Andrews, is really the celebration of that first baptism in 1971, her own baptism.  Pastor Andrews, now a (retired) commissioned minister of the gospel, has also been an evangelist, leading men and women up and down the Caribbean to Christ, just as she was led 50 years ago. Elder Steve Roberts, another October 30, 1971  baptized member, has been preaching on the local TV station for over 14 years. Elder New Jacob, another October 30 member is an international evangelist taking the Word of God to distant lands. Seeds planted 50 years ago have sprouted and are bearing fruit.

Central Church’s membership doubled by 1977, the dedication of the church, and continued to grow although it helped give birth to Hope and Bethel churches. It is the largest church in St. Croix and one of the largest in the North Caribbean Conference, in spite of COVID 19. Pastor Andrews has hinted that the celebrations will continue, for there are so many other dates in Central’s 50-year history to celebrate---the official organization of the church in April 1972, the breaking of ground, the dedication of the church, and others.