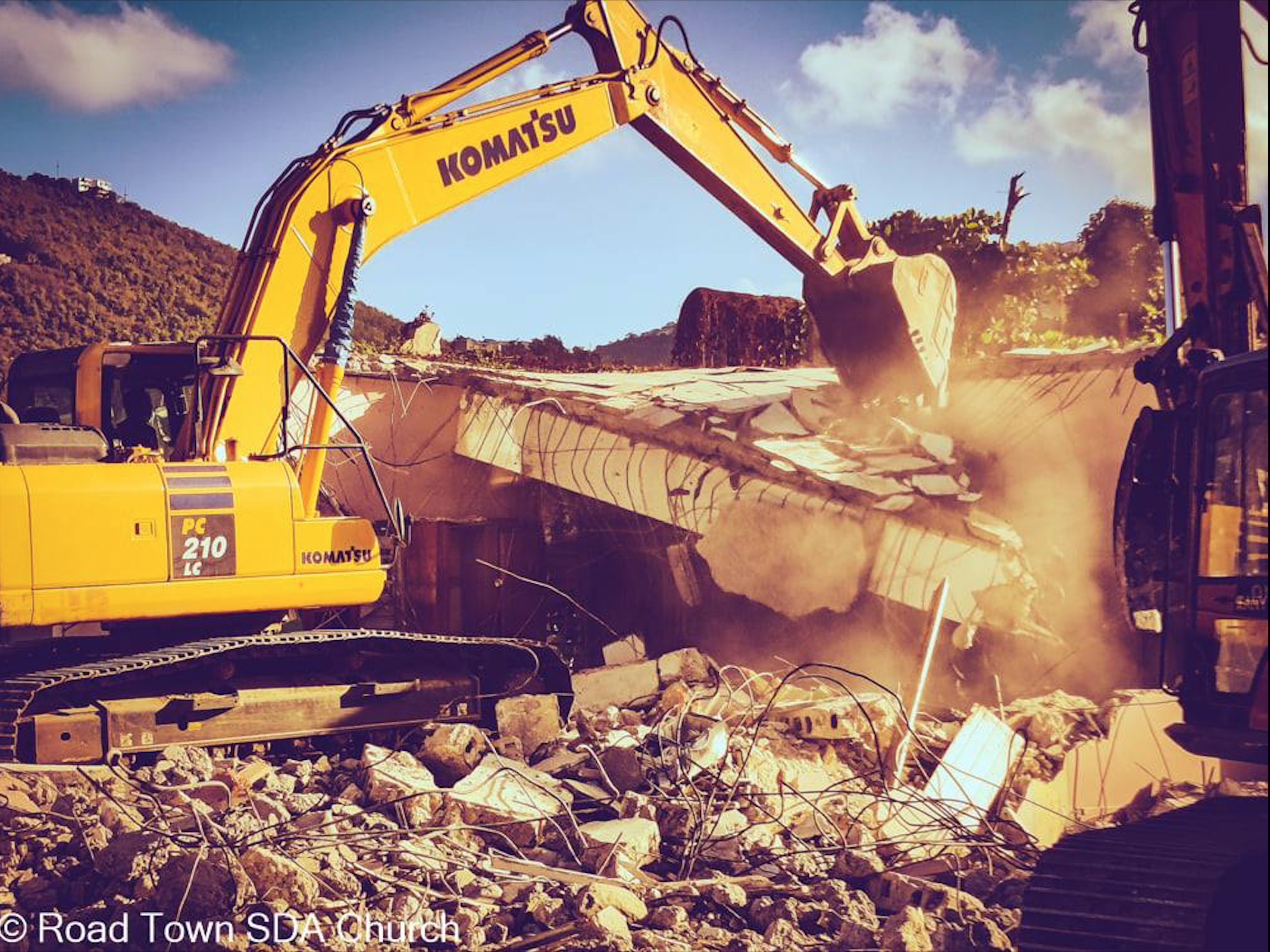 Three years after Hurricane Maria devastated the Caribbean island of Tortola, leaving buildings, homes, roads and trees in shambles, the pastor and members of the Road Town Seventh-day Adventist (SDA) Church are preparing to erect a new structure.  On Sunday, February 7, 2021, church members and community friends gathered for the bittersweet experience of a demolition team, with equipment donated by a church member, levelling the ruins of the church which had been dedicated on November 30, 1980.

Pastor Sylvester Williams, who leads the congregation, commented, “The two catastrophic hurricanes, Irma and Maria of 2017, threatened the integrity of the structure. The second floor of the church was destroyed, amidst plans for expansion. The integrity of the remaining structure was compromised and, as a result, plans to expand were aborted and rebuilding plans evolved.”

Mr. Wade Tobin, an elder of the church and principal of the BVI SDA School, reminisced on the aftermath of the hurricane, “There [was] destruction all around.  There [were] no trees around.  You [could] see one end of the city to the other; it seemed so transparent and the church took a beating.”

The Seventh-day Adventist Church has deep roots in the British Virgin Islands community.  Of the nine (9) SDA congregations in the BVI, the Road Town SDA Church is the oldest.  In the early 1900’s, the congregation worshipped in a structure located at Sea Cow’s Bay which was destroyed by a hurricane in 1916.  In the 1930’s, property was acquired in Road Town and the congregation moved to its current site.  As it outgrew its humble beginnings of a wooden framework, the building was refurbished but the membership growth outpaced the amenities.

For sentimental reasons, the consensus of the members was that the Adventist presence should remain in Road Town. On July 6, 2011, two (2) small, adjoining parcels of land were transferred to the church from the Government of the British Virgin Islands, for the sum of one dollar ($1.00).  The acquisition of these properties added some well-needed square footage to the new edifice which offered more seating capacity; more child-friendly areas for the Children’s Division; easy access for those that are differently abled; accommodations for community humanitarian services; and additional restrooms with two (2) showers.  The church also served as a community hurricane shelter and was once the home of the BVI SDA School for many years.  Ironically, the school, which was fixed after it sustained damages from the hurricanes of 2017, has been housing the congregation’s worship services.

To assuage the concerns of those who treasure the memory of the construction and dedication of the building 41years ago, Pastor Sylvester Williams reminded the congregation, “God is going to help [you] build back better no matter the cost and, moving forward, the church is going to need all the help it can get. We would appreciate anyone that has a skillset that can contribute to re-building. If there is anyone who would like to help out financially, we certainly would appreciate it because it’s an expensive undertaking.  I have no doubt that the community - as soon as there is a plan in place – [is] going to be right there with open arms to make sure that the church is rebuilt.”  The new building will bring honor to God, enhance the image of the Church, deliver ministry to the British Virgin Islands (BVI) and be celebrated by the community.