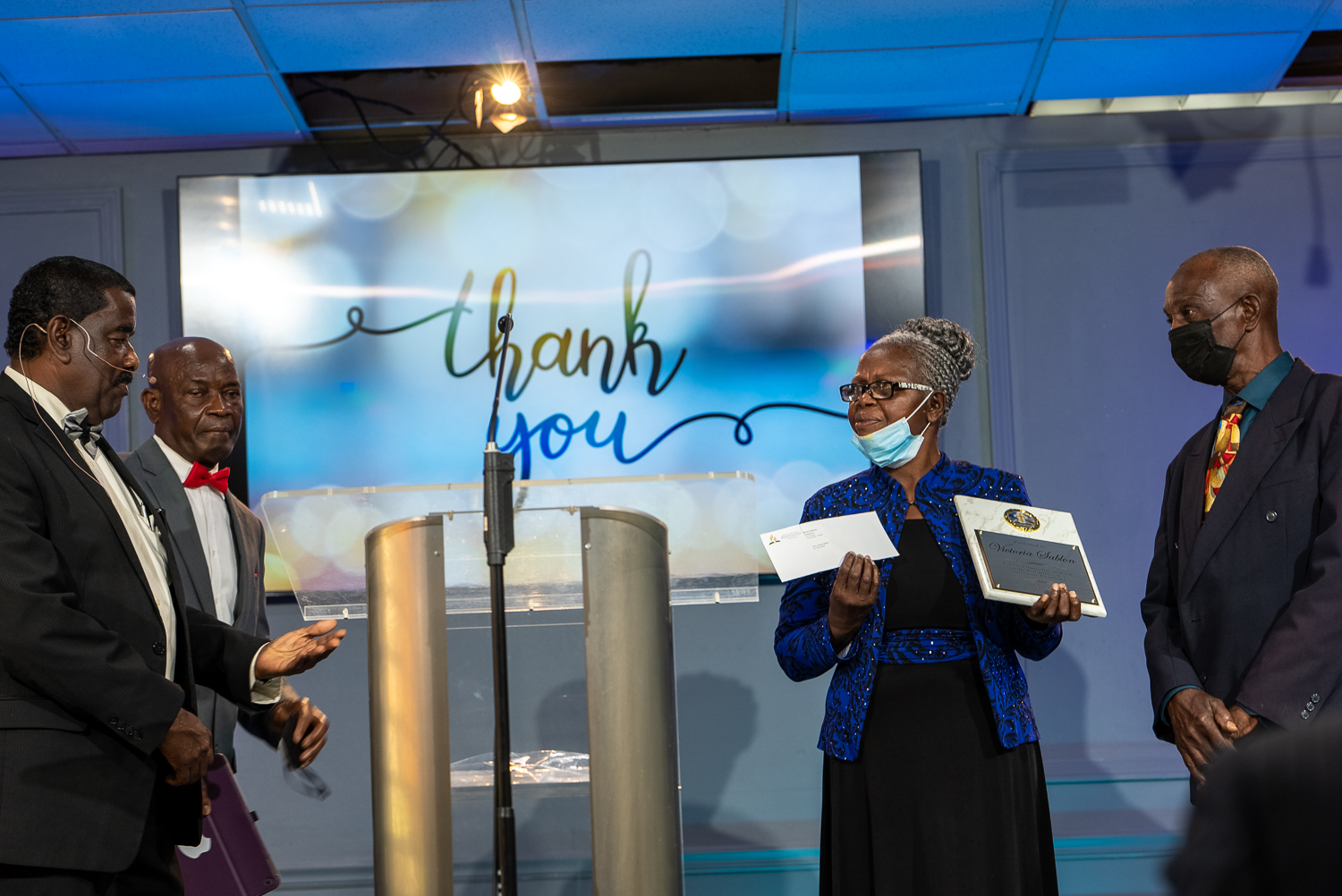 The pages of Seventh-day Adventist (SDA) literature evangelism have been steadily turning through the efforts of stalwarts like Sister Victoria Sablon, on St. Croix.  During the Sabbath service on August 7, 2021, leaders of the North Caribbean Conference (NCC) gathered at the Peter’s Rest SDA Church to recognize her ministry to the Conference, as a full-time literature evangelist (colporteur) for thirty-five (35) years.
Sister Sablon found moments to connect with people through a ministry that she loves. She visited schools, businesses, government offices and artists’ studios.  She left no stone unturned in her quest to touch lives and even hosted large conferences. Each day, she went in search of individuals whom she could impact with a word of encouragement, prayer and reading material for sale. Sister Sablon praised God that several people were baptized into the Adventist Church, through her ministry.  Her service continued over the tenure of a few NCC presidents and publishing directors, and she is grateful for their leadership.
Pastor Desmond James, NCC President, stated, “Sister Sablon took on ministering through literature evangelism for more than three decades and both Conference officials and her family believe that God has called her into this ministry. She stands among men like William Ham, who prioritized and gave of [his] best, joyously, in doing canvassing work. Your dogged devotion and passion for this canvassing work is evidenced by the many methods you employed to leave the printed pages in the homes of people. You took it in your car and even into your business.”
The Publishing Ministry Director of the Caribbean Union, Mrs. Judith Smith, commended Sister Sablon, “This is an opportunity to salute a true woman of God who has canvassed for so many years, distributing books all over the island of St. Croix. Only eternity would reveal the many lives she would have touched during those years.”
Dr. Henry Peters, the Publishing Ministry Director of the North Caribbean Conference, paid tribute to her service.  He added, “The publishing ministry of the North Caribbean Conference Is making this presentation, which I believe would live in the memory of those who will come by. The church plans to continue supporting its literature evangelists. I have seen that their faith is strong and we value them because they are an integral part of evangelism in our territory. We praise God for the success of our literature evangelists and Sister Victoria Sablon is one of them.”
She was a champion literature evangelist in the NCC, for many years, as well as an outstanding literature evangelist in the Caribbean Union.  Sister Sablon did not allow the COVID-19 pandemic to stifle her love for literature evangelism.  Despite unfriendly and unusual restrictions of the pandemic, such as the need to social distance, she went out each day and met new people with whom she shared the literature.
Sister Sablon said, “I love to preach the gospel. I love to give Bible studies. Things are terrible because people don’t want you to come near them, they don’t want to listen to you.  I put God before this work and pray that He continues to use me to share this wonderful message.”
She expressed gratitude to her husband, who stood beside her as she accepted her service award, and added, “For many years I have been leaving him at home to care for the children. He has never one day expressed tiredness or frustration.’
Sister Sablon delivered a few words of inspiration to the members, “Literature evangelism is a call from God.  This is the time that you hold on to the hand of God.  This journey is one that I will continue until death. It is a work that is second to none and I would not exchange it for any million-dollar job. It has helped me to meet people that I never met before. It has given me health. It has given me wealth and it has saved souls.”
Pastor Earl Daniel who is the spiritual leader of the congregation and a former NCC Publishing Ministry Director, also applauded her service.  He said, “This is an amazing ministry to carry out for God and what has been done by the Caribbean Union and the North Caribbean Conference for Sis Victoria Sablon – she is deserving of it. Just as you have been victorious in the work that you have done, I pray that you will be victorious to stand on the sea that looks like glass.”
Several members expressed delight that efforts had been made, by the NCC, to express thanks to Sister Sablon.  They added their congratulations and prayers that God will allow her to shine on, in the ministry of literature evangelism.