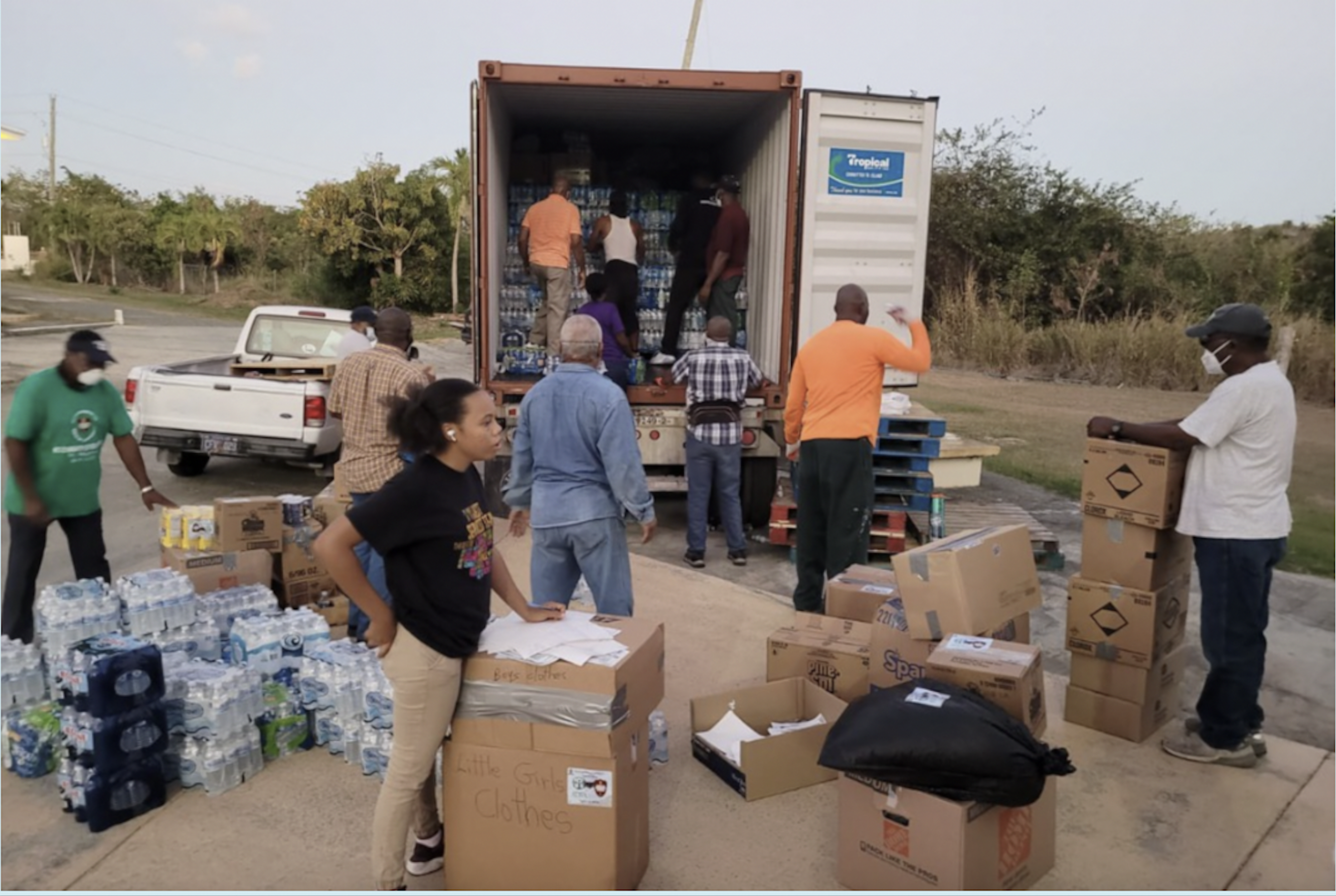 Adventists around the North Caribbean Conference (NCC) joined forces to provide urgent assistance to the people of St. Vincent and the Grenadines, when more than 20,000 “Vincentians” were displaced from their homes after the eruption of  La Soufriere  Volcano on April 9, 2021.  This volcano, which had been dormant for more than 40 years, suddenly stirred, streamed magma down the mountain and engulfed the South-east Caribbean’s atmosphere with toxic ash.
The President of the St. Vincent and the Grenadines Mission, Pastor Dermoth Baptiste, indicated, “No one escaped the assault. Ten of our Adventist congregations were directly affected, and hundreds of members and entire communities had to quickly evacuate the danger zone - many escaping with only the clothes on their backs.”
Pastor Alexander Isaacs, the Health Director of the Caribbean Union, emphasized the need created by the volcanic devastation, “We’ve discovered there are major gaps in basic needs, including food, water, hygiene, cleaning kits and personal protective equipment.  The needs are widespread, and we are working round the clock to get these essential items to those impacted.”
The Adventist Development and Relief Agency (ADRA) through its local NCC Director, Pastor Wilmoth James, collaborated with the NCC Community Services Director, Dr. Henry Peters, to commission a prompt and robust “Mission of Mercy” throughout the ten-island NCC territory.  They mobilized and coordinated a rapid response to alleviate the discomfort of residents on St. Vincent and the Grenadines.  Additionally, the Conference reserved Sabbath, April 24, 2021, to collect a special disaster offering in all its congregations, for individuals displaced by the disaster.
The NCC response included four 20-foot containers filled with supplies sent from St. Croix – two containers were sponsored by the NCC Office and two by the constituency of St. Croix which included items from community friends.  Other islands around the NCC territory also responded - one container was sent from St. Eustatius and one from Anguilla while nineteen (19) pallets of supplies were sent from Tortola and seventeen (17) pallets from Sint Maarten.  The disaster response tally included more than 2,500 cases of water as well as personal hygiene care packages, cleaning agents, toiletries and clothing.  The constituency of St. Thomas supported the joint effort by collecting more than $19,000.00 for the St. Vincent relief fund.
“Many of you have watched the heartbreaking pictures of the effects that this seismic activity has had on the people of St. Vincent. The devastation has been enormous. This natural calamity has severely impacted the nation’s health and welfare and has caused massive destruction to their lives, not to mention their properties,” stated the NCC President, Pastor Desmond F. James, to the constituency.  Considering the response, Pastor James noted that the Administration is “extremely grateful and thrilled by the robust response as the peoples of the North displayed a massive, compassionate response in cash and kind to assist our brothers and sisters in disaster. Leaders have already received some of the supplies and have applied them to those affected.”

Pastor Wilmoth James said, “ADRA emergency teams worked on the ground to mobilize members to support the need on the island of St. Vincent.  It’s in response to helping support the needs on the island during this very challenging time.  The response was overwhelming.  We are grateful to God for the membership coming together for this mission of mercy. We believe that there are three factors that contributed to the response. Firstly, the structure that has been built by ADRA, over the years in the island territories. The organization established ADRA depots in every territory with efficient leaders who could take initiatives and give leadership to emergencies like these. Secondly, the personal experiences of the members allowed them to identify with the needs on St. Vincent. Members know what it meant to sleep without roofs on their heads and to be in need of water. And thirdly, the fact that the spirit of generosity is still alive in the membership of the North Caribbean Conference.”  He estimated the dollar value of the NCC relief response, thus far to the people of St. Vincent, at more than USD$196,000.00.

Dr. Henry Peters underscored how the membership rose to the occasion. “Members shopped for clothes and foodstuffs; communities collaborated with the church and made an all-out effort to lend support to the initiative.”

The local coordinating team on St. Vincent, which received the relief supplies, worked with local Adventist churches to set up shelters and provide up to 300 meals each day. At least ten Adventist schools and churches were designated as official shelters to house evacuees. Due to increasing demands, meal distributions doubled as part of the response effort. The massive relief effort is on-going as the government of St. Vincent and the Grenadines partners with international entities to build a more resilient community.