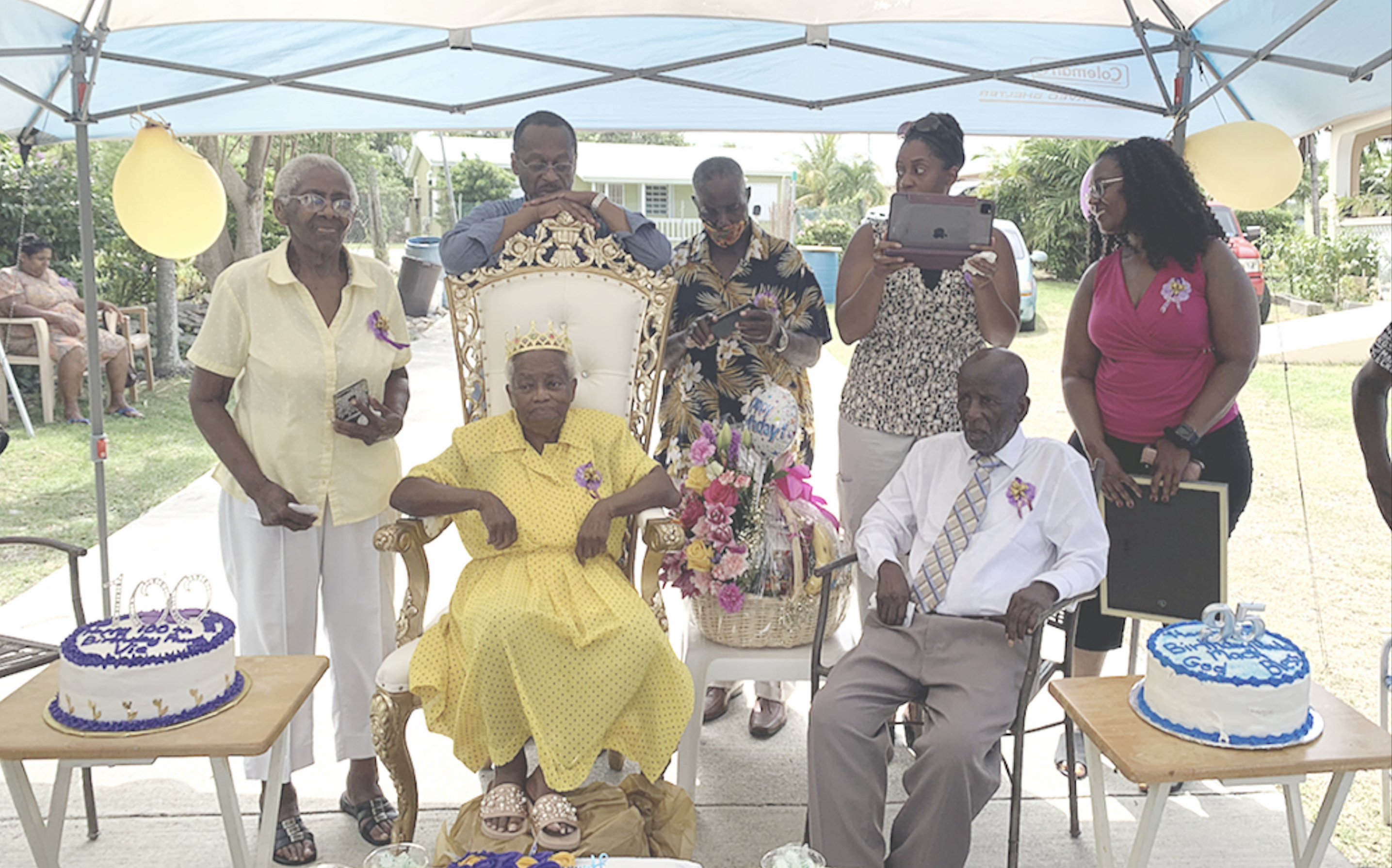 Church members of the Christiansted Adventist Church in St. Croix, United States Virgin Islands, recently celebrated the 100th birthday of Violet Eversley during a special ceremony with her brother, Charley Mack, and additional family and friends.

Family members told the story of how, more than a century ago, Mary Ann Daniel left Antigua and joined thousands of migrant workers who were employed in the construction of the Panama Canal. There, Ms. Daniel met another Antiguan, Joseph Mack, who was also in search of a better life.  Their union produced Violet on August 23, 1921.  Five years later, Charley was born.

The siblings have been keeping each other’s company by sharing a residence during their golden years and are longstanding members of the Seventh-day Adventist Church, leaders said.

Pastor Earl Daniel, who oversees Christiansted Adventist Church and its district, was joined by church members in cheering for Ms. Eversley on her 100th birthday celebration and her 95-year-old brother.  “Sister Violet, it’s a great privilege and joy to be here to celebrate your one hundredth birthday with you, as it is a blessing to live to see this milestone,” said Pastor Daniel. “You are still moving around and it’s a testament of God’s blessings on your life.  May He continually bless you.”  Eversley is one of two church members on St. Croix who recently turned 100, church leaders said.

Nieces, nephews and other family members, who travelled to St. Croix for the centennial celebration, described Eversley as dedicated and friendly.  “Aunt Ida is a very hard-working woman, and she is very kind,” said a family member. “She is charismatic and someone you want to be around. Her great smile makes you feel welcome and when she talks with you, you feel special.”

Her Brother stated, “God has been good to us.  My sister and I have had a long history of movement and trust in God,” he said.  “We realize the closing times we are living in, and we are preparing for the coming of the Lord…that will be something.”  Mack added that his sister lives her life in selfless service to God and His church and knows no other religious affiliations but of that in the Seventh-day Adventist Church.

Mack, who once served as the principal of the St. Croix Seventh-day Adventist School, recounted how he successfully addressed the reluctance of some denominations to work with Adventists and how God opened doors for spreading the gospel through the SDA School.  He shared how God had miraculously led them.

Eversley, who was born in Panama, studied and worked as a nurse in New York. She was once married for six months before her husband died. She later re-married and moved to Barbados. Her second husband died after some years. She then decided to move to St. Croix where her brother lived and retire there.

Church leaders praised Eversley for being an “ardent church member in St. Croix and for her knowledge of Ellen G. White writings.”

Throughout the afternoon’s celebration, those gathered shared accounts of God’s leading over a century. Members who grew up in the Christiansted Adventist Church traded stories about attending church in the old days.  Memories of the past were shared through pictures and stories during the celebration.