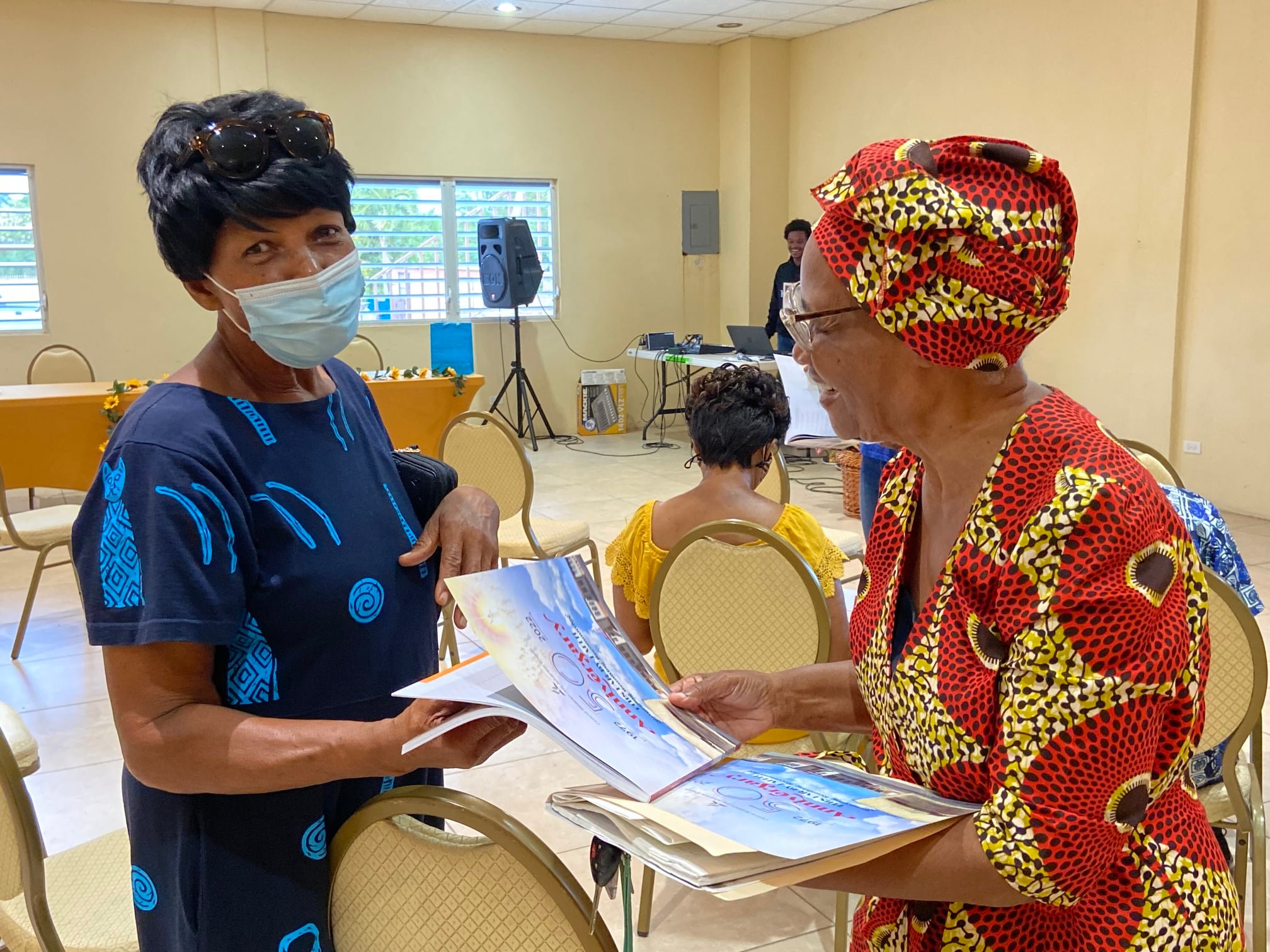 Central Seventh-day Adventist (SDA) Church, a pillar of the St. Croix, U.S.V.I., community has been positively impacting the residents of Estate Plessen and surrounding areas through its members, since 1972.  Efforts were made to touch lives through education classes for adults, cleanup days in the community, care packages for firefighters and other families, luncheons for the disabled, and recreational activities for the youth.  To chronicle 50 years of selfless service, the Central Seventh-day Adventist (SDA) Church launched its commemorative magazine on Sunday, April 24, 2022, at the end of an anniversary celebration that spanned two weekends.
The stories, poems, testimonies, photographs, and other articles in the magazine were set against the backdrop of the anniversary’s theme, We Have Come This Far by Faith.  “It is the Lord who has blessed our efforts during these 50 years of service,” said Pastor Thomas Rose, senior pastor of the congregation.  Evidence that the church made solid contributions to the Seventh-day Adventist lifestyle, echoed in the unique accounts and congratulatory messages from church leaders and former pastors.
“The magazine detailed moments of grace and blessing that the church and its members experienced throughout its 50-year history, which laid the foundations of its identity, beginning with the backstory of its sojourn with the patchy tent,” commented Pastor Royston Philbert, as he reviewed the articles.
It was heartwarming to welcome Dr. Stanley Michael, the first pastor of the congregation, and Mrs. Annette Michael, his wife, to the event. The 50-year mark left an enduring impression on them, and they shared, “We remain grateful that the church will be a living and profound testament to the truth, that all who step on the compound of Central SDA Church are welcomed to its history and its mission.”
During the launch Philbert observed, “I glanced through the crowd and noticed sheer delight on the faces of members as they examined autographed copies of magazines that they purchased.  I also saw appreciation; I saw history but most of all, I saw contentment.”
The Executive Editor and Chair of the magazine committee, Sister Annette Michael, revealed nuggets hidden in the magazine. We will cite three of them:
Fourteen-year-old Anirah Smith received a $250 cash prize for her artwork submitted in the 50th Anniversary artwork contest. She is the daughter of Debbieann and Clifton Smith. She is a 9th grade student at the St. Croix Seventh day Adventist School, a Pathfinder and member of the praise team. Her hobbies include graphic design and painting. Anirah was invited to come forward to accept her $250 award.
Sigorney Dorsey, daughter of Editor-in-Chief of the magazine Charlene Johnson highlighted two of the many unsung heroes of its 50-year journey through poems written by Johnson. One is Mrs. Mary Thomas who was celebrated in the poem “Love Miss Mary.” She is celebrated for her ability:
To feed the five thousand
At Pathfinder Camps
Prison Ministry retreats
Community buffets
Communion Tables
Saturday night fundraisers
And Sunday morning breakfast
....
Feeding affection
Consuming care
selling and sucking salt.
Is it ever enough?
Another nugget revealed is “The loveliest Rose in Central's Garden” Casilla Joseph who is thanked "for 40 years of making the church premises look as inviting as it does:”
You move among the planters at first light
Watering cans pour out the only sounds
From verdant scenes and imaginings of night
You wake to tuck seeds and stems in the ground
....
Cass, the loveliest rose in Central’s Garden
You stalk nestled in The Family’s fond clutches
You beautify our landscape-a real bargain
We join songbirds tweeting on rose branches.
The magazine illustrates the deep conviction, faith, and determination of the Central Seventh-day Adventist charter members and their quest to spread the message of salvation to the community of St. Croix. Through prose and verse, it traces how the mission-minded congregation engaged in evangelism and established the largest congregation in the North Caribbean Conference.  The “nostalgic adventure in the 98-page publication” gives a fresh vision of a church still looking forward to the coming of Christ. Sis Faye Williams (pianomstr@hotmail.com) is the point of contact for anyone who would like to acquire a copy of this commemorative magazine and other memorabilia from the 50thanniversary celebrations.