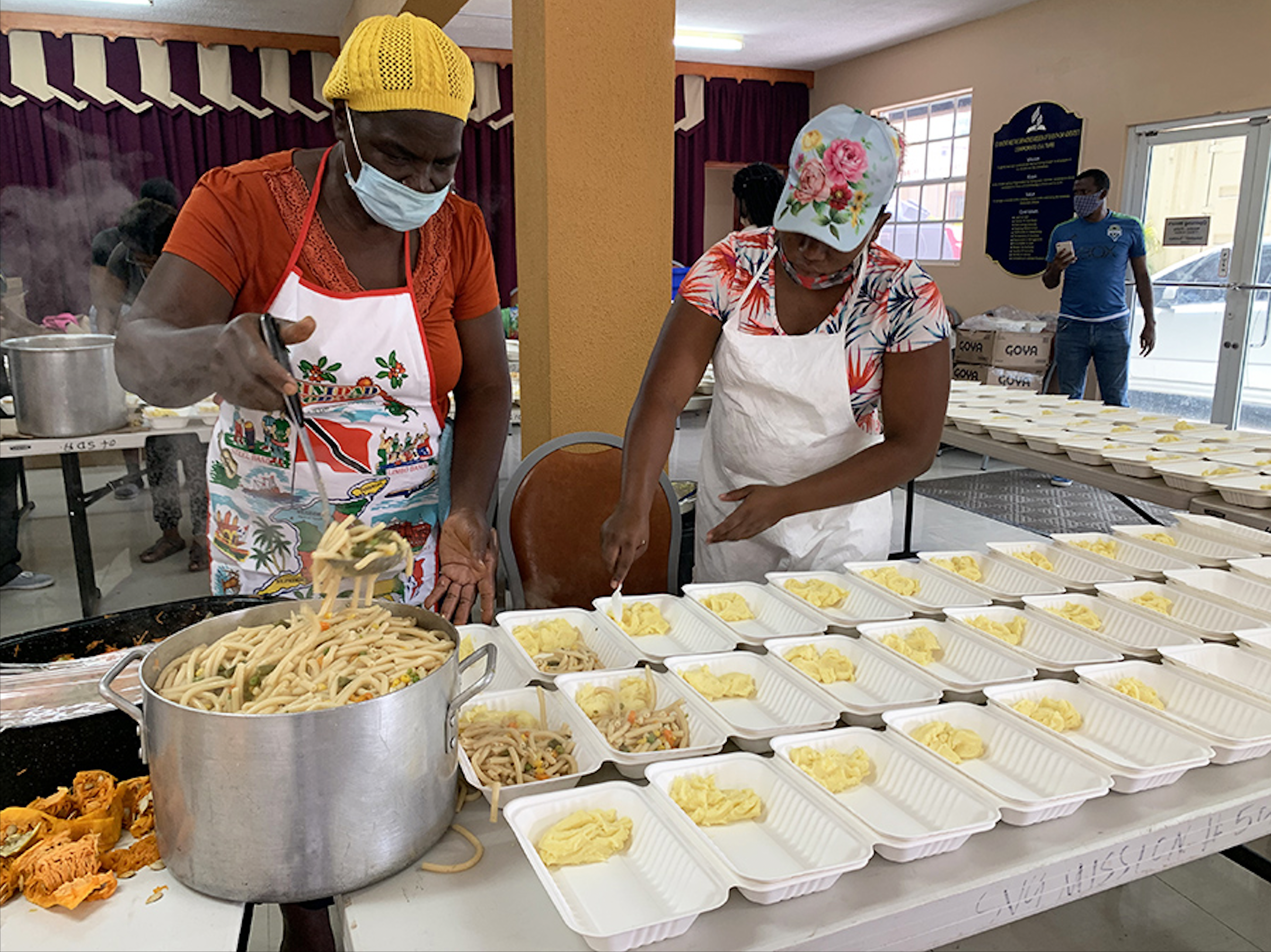 As the La Soufrière volcano continues to spew ash, hot gas and hot lava across St. Vincent, the Seventh-day Adventist Church, along with the Adventist Development and Relief Agency (ADRA) and church member volunteers, has begun providing food and clothing to hundreds who are staying in shelters across the island.  More than 20,000 people have been displaced from their homes since the eruption began on April 9.

“No one has escaped the assault of the volcano for the entire country has been blanketed with dust, ash and rubble,” said Pastor Dermoth Baptiste, president of the church in St. Vincent and the Grenadines Mission, headquartered in Kingston in the southernmost part of the island. “Scientists have reported that some areas have up to two feet high of ash in the most affected area,” said Baptiste. There are a lot of destroyed homes that may take a long time to get back to, he added.

Ash has traveled as far as the neighboring islands of St. Lucia, Grenada and Barbados.

Preparation and distribution of hot meals

So far, Baptiste reported that 10 Adventist churches were directly affected, and hundreds of members and entire communities had to quickly evacuate the danger zones, many escaping with only the clothes on their backs.

ADRA will assist in an initial one month response to assist in preparing and distributing 1,200 hot meals daily for 600 staying in shelters.

Prime Minister of St. Vincent Dr. Ralph Gonsalves thanked the church for their leadership in assisting the community as church leaders and volunteers gathered for a press conference at the church’s headquarters in Kingstown.

Prime Minister of St. Vincent and the Grenadines Dr. Ralph Gonsalves is shown rice and peas, fried fish, plantains and salad that was prepared for the shelters on Apr. 18, 2021, after he spoke at the church’s mission headquarters during a press conference with church leadres. The feeding program overseen by ADRA and the church will provide 1,200 hot meals every day to 600 persons. [Photo: Kerry Kerr]

“The Seventh-day Adventist Church is really showing that they are their brother’s keeper,” said Gonsalves. “It is a good example for other churches to follow.”

Church member volunteers began preparing hot meals for lunch and supper as Adventist youth began delivering the meals to several shelters. Hot lunches and suppers will be prepared every day for the next four weeks and needs will be assessed next month, said Baptiste.

Nine Adventist churches and one secondary school are being used to shelter over 300 persons, said Baptiste. Because of Covid-19 restrictions, only essential personnel are allowed to enter. Baptiste said the church has been able to provide clothing, especially because so many people ran out of their homes with only what they had on.

“We are focusing on their basic needs right now, but we know that so many are going through a lot of trauma, distress, and anguish because they have no home to get back to,” he said.  Since Baptiste is unable to visit shelters, he spends his time helping coordinate efforts and provide spiritual encouragement to pastors who are keeping in communication with their congregants.

“We had just re-opened churches for physical attendance on the first Sabbath in April, and then days later the volcano disrupted so many lives,” said Baptiste. He keeps reminding leaders and encouraging members on the phone to keep the faith and continue trusting in God. “We don’t know what is going to come out of this but take your eyes off the environment you are in, the trying circumstances and see God lifted up, for He is in control, even of the elements.”

Many of the roads continue to be impassable, church leaders said.

Pastor Dermoth Baptiste, president of the St. Vincent and the Grenadines Mission speaks during the press conference about the church’s feeding program beginning of Apr. 18, 2021. [Photo: Kerry Kerr]

The water system was shut down in the initial days of the eruption because of air contaminants. Government agencies are doing the necessary cleansing to ensure the water is potable, he said.

A shipment of 428 cases of water and a large container with bales of rice were just received by church leaders in St. Vincent, thanks to the Seventh-day Adventist Church in Grenada, local leaders said. The donated water and rice will be delivered to the shelters this week. Other supplies are being sent from local fields in neighboring islands, church leaders said.

Church leaders are also planning to provide trauma counseling to those in the shelters as soon as possible.

Community members in the central part of the island fill their buckets with fresh underground water source. [Photo: Ruff Samuel]

“Scientists are saying that the eruption could last for months or even longer and we know that the entire mental health condition of the entire population is at risk,” said Baptiste.

In addition, plans are underway to supply reading materials in the shelters, including Bibles, storybooks for children, puzzles, and toys that can attract children’s attention.

“Our people are known for their tremendous resilience and courage to stand in crisis. I am confident that by God’s grace, we will rise from the ashes,” Pastor Baptiste said.

Several individuals begin clearing ash from the roof of a house in what is considered as a safe zone, in the fishing town of Barrouallie in St. Vincent [Photo: Ruff Samuel]

The last eruption of the La Soufrière volcano was in 1979 with no reported casualties. Prior to that, an eruption in 1902 claimed the lives of nearly 1,600.

There are more than 14,400 Seventh-day Adventists who worship in 42 churches and congregations in the St. Vincent and the Grenadines. The church operates five primary and secondary schools.

Kerry Kerr contributed to this report.